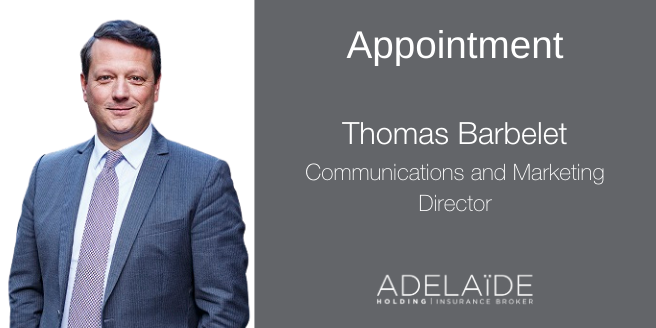 As a member of the Executive Committee chaired by Jacques Verlingue, Thomas Barbelet reports directly to Gilles Bénéplanc, Group Chief Executive Officer.
His primary mission will be to support the Group’s strong growth in France and internationally by making its subsidiaries Verlingue, Génération and Coverli fe leading brands in their respective markets.

Since 2015, Thomas Barbelet has held various strategic positions within the Keolis group, deploying a new brand and communication strategy to support the development of the Group’s activities and then also integrating foresight and marketing from 2018.

Previously, he worked between 2009 and 2015 at VINCI Concessions as Vice-President Marketing, Innovation and Communications where he managed the brand strategy, public affairs and customer experience of the concessions of the construction group (VINCI Airports, VINCI Highways, VINCI Railways, VINCI Stadium and VINCI Park).

With a degree from EFAP and a Master 2 in Political and Social Communication from the University of Paris 1 Panthéon-Sorbonne, Thomas embarked on his career as a consultant in financial communications. In 1996, he joined Questel, a subsidiary of the France Telecom Group, as Marketing Communication Manager in London, Paris and then Washington, before becoming Deputy Director of Communications for Solocal group from 2000 to 2009, for whom he notably created the PagesJaunes brand.

“The appointment of Thomas strengthens our expertise to support our strong growth momentum. His career path is fully in line with our challenges and our ambition to make the Adelaïde Group a major insurance broker with a European dimension that is family-owned and independent” said Jacques Verlingue, Chairman of the Adelaïde Group.

“In an insurance brokerage market undergoing a major transformation, I am delighted to join the Adelaïde Group. I am committed to contributing all my energy to the dynamism of the Verlingue, Génération and Coverlife teams to help achieve the Group’s objectives of profitable growth and European expansion” said Thomas Barbelet.