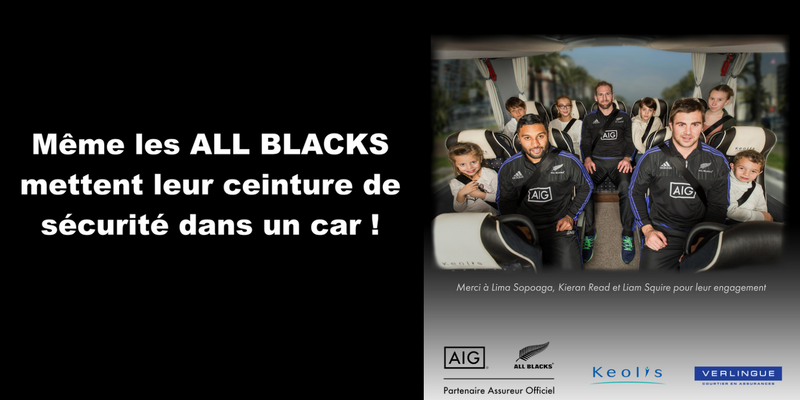 On Monday 21 November a rather different photo shoot took place outside the hotel in Neuilly, near Paris, where the All Blacks were staying for their last test match against the French.

Keolis, a major player in public transport, Verlingue, their insurance broker and AIG, the official insurance partner of the All Blacks, had invited three of the top players in this famous rugby team to lend their image to an accident prevention campaign on wearing seatbelts in school buses.

Jean-Pierre Farandou, Chairman of the Keolis group explains that “Keolis pays special attention to accident prevention and the safety of its passengers. This campaign is designed to supplement the scheme already put in place by Keolis with its road safety partners, Association Préventive Routière, ANATEEP and FNTV“.

The All Black players, Kieran Read, Liam Squire and Lima Sopoaga already sympathise with such issues and naturally agreed to join this new campaign.

Richard Deguettes, AIG’s deputy GM in France explains that “We and Keolis agreed immediately and we knew that the All Blacks team would be sympathetic. We share the same values”.

This new awareness campaign will be launched during 2017 with the distribution of 500,000 flyers and awareness sessions in schools and colleges.

Eric Maumy, the Verlingue CEO explains that “we always strive to support our customers and are delighted to have imagined, with Keolis and AIG, this awareness campaign which should draw the attention of children to such a major road safety issue, particularly as even the All Blacks put on their safety belts in coaches”!