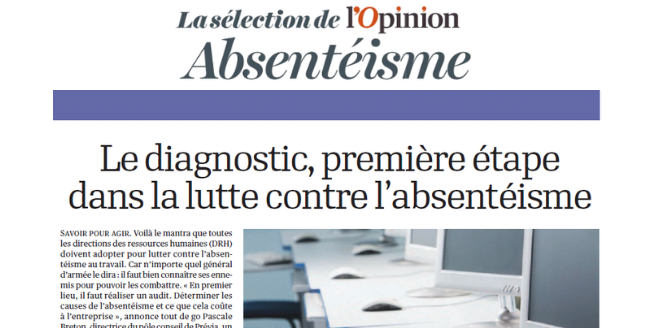 Harnessing knowledge to take action. Such is the mantra that all Human Resources Departments (HRDs) must adopt to fight absenteeism at work. Because any army general will say it: you have to know your enemies well to be able to fight them. “First of all, an audit must be carried out. Identify the causes of absenteeism and what it costs the company,” says Pascale Breton, Director of the Consulting Division of Prévia, a firm specialised in occupational health and well-being.

First of all, agree on what is termed absenteeism. Surprisingly, there is no official definition. Should absences on personal
grounds, such as caring for a sick child or days granted for a move, be counted, or should they be limited to sick leave of several days? Should accidents at work and occupational diseases be included? In reality, it all depends on the company’s culture and objectives.

Human resources professionals tend to think that it is better to “sweep wide”. his avoids holes in the racket. “Minor” absences are not always so harmless. “We notice that young people are absent for less time but more often. On the ground, the feeling often expressed by managers and employers is that the new generations have a different work value,” says Pascale Breton euphemistically. Three-day work absences for a common cold can reflect a weak attachment to the company. And in the long term, it can pose performance issues, even turnover problems.

Contextualising. Once the scope of absenteeism is well defined, you should see your
evolution over time. Does the percentage of employees absent in relation to the wage bill increase from year to year? If so, by what proportion?

“We analyse the data from the company and exogenous values that
allow us to to contextualise absenteeism and analyse its causes”, explains Jean-Marc
Esvant, Director of Social Protection within the insurance broker Verlingue. Once the cyclical causes such as an outbreak of influenza, stomach flu or a series of public transport strikes have been ruled out, a sharply rising absenteeism rate is often a sign of unhappiness.

Above all, a rate does not mean much as such. It must be benchmarked to learn from it. Ideally, a company should compare its absenteeism with that of its business sector, its main competitors, companies of equivalent size, but also its region or even its employment area. As this data is seldom available, companies most often need help.

In recent years, supplementary health insurers, accident cover institutions such as Malakoff Médéric Humanis, mutual insurance companies and insurance brokers have also developed comparison tools to help their customer companies determine whether or not they are in line with their market standards for absenteeism. “We develop and share with HRDs several categories of targeted indicators to address the sources of absenteeism. We combine these data with geographical and/or sectoral benchmarks, in order to determine together the appropriate levers and solutions to remedy them,” explains Jean- Marc Esvant.

Collecting data. Data collection is facilitated by the nominative social declaration (DSN), which has been mandatory since 1 January 2017 for companies, regardless of their workforce. This electronic procedure, which replaces some thirty reporting formalities, allows insurers – who pay employees on sick leave the daily allowances in addition to those of the Health Insurance – to know almost “in real time” when the employee is granted sick leave by their doctor and when they return to work.

Such “data” can be refined. “We cross-reference socio-organisational and HR data and complete our analysis with individual and group interviews with employees,” explains Prévia’s Pascal Breton. A straightforward process that can be painful. “The company must be prepared to deal with potentially negative employee feedback,” warns the consultant. More often than not, ignorance is bliss…