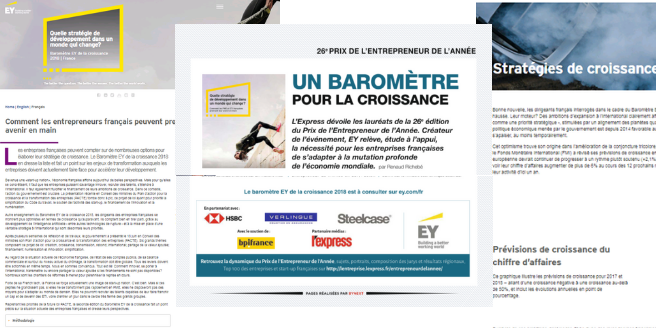 As part of the 26th Entrepreneur of the Year Awards, an event in which Verlingue has been a partner since 2012, EY is publishing the growth barometer in France in 2018.

French companies can rely on many options to develop their growth strategy. The EY Growth Barometer 2018 lists them and takes stock of the transformation challenges that companies are currently facing when it comes to boosting their development.

A few key figures:
33% of executives consider entering a foreign market as a strategic priority – driven by an almost unprecedented alignment of planets. Indeed, financing conditions remain attractive, the government’s economic policy has been business-friendly since 2014 and concerns about Brexit seem to be easing, at least temporarily.

In 2017, business executives radically changed their minds about artificial intelligence (AI). It is now considered a real growth driver. Now, 87% of the executives polled are deploying this technology or planning to do so over the next two years.

Apart from some concerns about the macroeconomic environment, the leaders interviewed believe that growth is sustainable, to the point that their companies are starting to hire again. Full-time employment is up 18 percent points, reaching 40% in 2017! At the same time, as a sign that companies want to rely on stable resources, part-time employment and temporary assignments are running out of steam, falling to 9% (the intention was 22% in 2017).

Find out more about the Growth Barometer in France in 2018