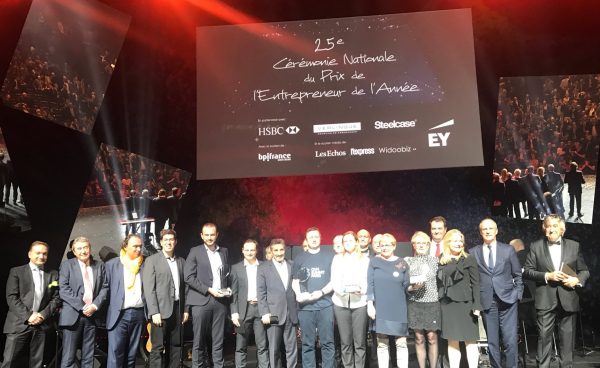 The 25th EY Entrepreneur of the Year Awards ended on Tuesday 17 October 2017. Having celebrated in their respective regions, the 65 winners met in Paris (at the Salle Pleyel) to find out the national winner in each of the categories.

Verlingue, an official partner of the Entrepreneur Awards since 2012, had the honour of presenting the Family Business Award to Marie-Laurence Gouraud, Bénédicte Mercier and Patricia Brochard, Co-Presidents of Sodebo. They follow on from Denis Lambert, President of LDC, who won in 2016. We look back with images at the ceremony and the winners.

Start-Up of the Year Award: Yvan Wibaux, Eric La Bonnardière, Managing Director and President of Evaneos
With more than 1000 local agencies and 160 destinations offered, from the most famous to the most unusual, Evaneos encourages travellers to surprise themselves and see places in a new light, far removed from the tourist routes and standard tours.

Family Business Award: Marie-Laurence Gouraud, Bénédicte Mercier and Patricia Brochard, Co-Presidents of Sodebo
Since 2000, the three sisters have run the leader in agri-food with a confident and united approach and a constant focus on the well-being of their employees. “We were lucky to be three sisters… there is no concept of power between us!”
In recent years, Sodebo has helped to create and develop the out-of-home consumption market through product innovations such as the pastabox.

Social Responsibility Award: Nolwenn Febvre, President and Founder of Les P’tits Doudous
Having previously won several awards in the past, Nolwenn Febvre’s association has developed a pioneering initiative – which has now been adopted by almost 30 hospitals and clinics in France – which allows hospitalised children to do away with anti-anxiety medication as well as reducing the hospital experience, from their beds to the operating theatre. It includes an interactive game for tablets (“You are the Hero” – in which the child becomes the hero of his or her hospital treatment), a sticker kit so they can personalise their anaesthesia mask, and Moulin Roty cuddly toys.

Entrepreneur of the Year Award: Octave Klaba, Managing Director and President of OVH
The Nord region winner Octave Klaba, the Managing Director and President of the European leader in cloud computing, was named Entrepreneur of the Year 2017. Founded in 1999, OVH employs 2,100 staff, is expanding into the United States and has announced a €1.5bn investment plan by 2020 and the recruitment of 1,000 people.
https://twitter.com/verlingue/status/920376928972001280