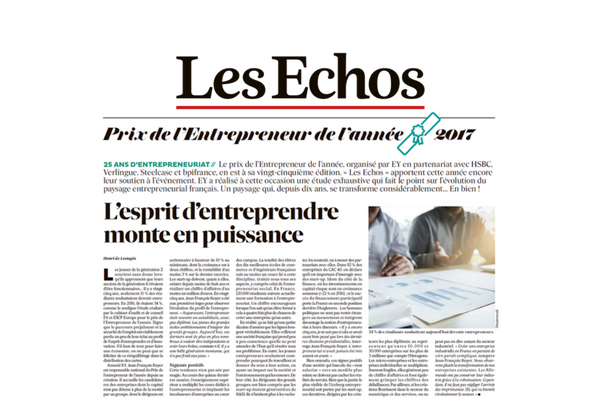 EY has recently carried out a study on how entrepreneurship is developing in France, coinciding with the 25th Entrepreneur Of The Year awards organised in partnership with Verlingue.

The Entrepreneur Of The Year awards, staged by EY in partnership with HSBC, Verlingue, Steelcase and bpifrance, is now in its 25th year. This year again “Les Echos” is supporting the event. EY has carried out an exhaustive study to take the temperature of entrepreneurship in France, in time for the event. The entrepreneurial landscape has changed considerably over the last ten years…for the better!

Young people from the Z generation probably smile when told that their X generation parents used to dream of becoming civil servants…twenty-five years ago only 15% of students wanted to become entrepreneurs. In 2016, the figure was 34%, as highlighted in the study by the audit and consulting firm EY and ESCP Europe for the Entrepreneur Of The Year programme. A sign that ready-mapped careers and job security have become less attractive in favour of an entrepreneurial and innovative spirit. Even though it takes everything to make an economy, we can only welcome this more balanced playing field.

Jean-François Royer, a partner at EY, has been in charge of the Entrepreneur Of The Year programme at national level since its creation. He welcomes nominations for companies whose equity is not held more than half by a group, whose CEO has at least a 10% stake, where growth is double-digit and profitability was at least 3% in its latest financial year. Companies that are start-ups must have existed for less than eight years and be achieving sales of at least EUR 1m. Over the last twenty-five years, Jean-François Royer, has had a front-row seat in observing changes in entrepreneur profiles. “Previously, an entrepreneur was often a self-made man or woman, relatively unqualified. The ambition of young graduates from the “Grande Ecole” system was to join a large group. Today, he says, such graduates are more likely to want to be independent and set up on their own. We can see a fine generation emerging, who are not easily scared. “

This trend was not born out of magic. Over the last fifteen years, higher education has multiplied courses dedicated to entrepreneurship and set up business incubators right on campus. All students in France’s ten best business and engineering schools follow at least one course related to all aspects of this discipline, including social entrepreneurship. In France, 120,000 students currently follow courses in entrepreneurship. An encouraging figure when you consider that after such training a student is four times more likely to create a company than others.

In reality, it is only over the last ten or so years that things have really started to move. This reflects French society, which is gradually coming round to seeing that you cannot expect the State to be an all-round problem-solver. In addition, young entrepreneurs want to understand why they work and give meaning to their action i.e. an impact on society and the environment that surrounds them. On the other hand, the CEOs of large groups have effectively understood that start-ups generate R&D. They no longer hesitate to buy them out, support them, or establish partnerships with them. 82% of CAC40 corporations say that it is important to interact with start-ups. The same goes for finance, where venture capital investments show sustained growth (+22% in 2016); and the success of crowdfunding puts France in second place behind the UK. Politicians have perceived this change and are bringing entrepreneurship more and more into their message. Jean-François Royer asks himself, “I wonder whether five years ago things would have gone so well as in the last presidential election. Entrepreneurship had never been upstaged so much before.”

Obviously, these positive signs of a society that is moving from “everyone salaried” to a more blended model, should not mask the realities on the ground. Although start-ups, managed by the most qualified founders, are the more visible side of the entrepreneurial iceberg they, nevertheless, only account for between 10,000 and 30,000 of the over 3m businesses in France. SMEs and sole-proprietorships are multiplying. These are often fragile and generate little revenue. They also contribute to increasing business-failure statistics. New businesses are blooming in the digital and services sectors but the same cannot be said for industry. “Setting up an industrial company in France from scratch seems complicated”, remarks Jean-François Royer. What we are seeing is, in fact, the transformation of our existing industrial firms. The Germans have been able to keep their industry going thanks to automation. However, you must not overlook the arrival of 3D printers, which will soon revolutionise the sector. “ 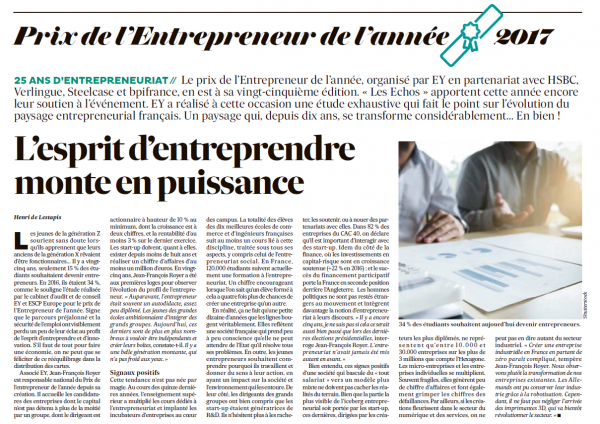