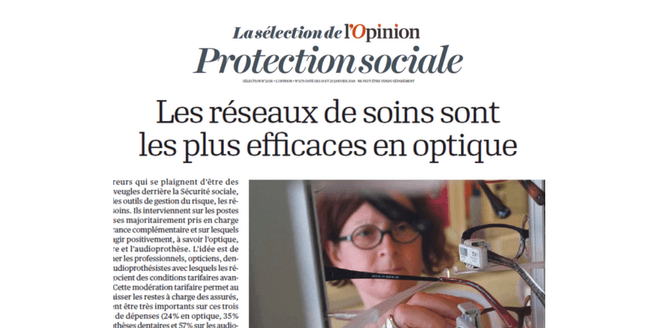 Complementary insurers are using health networks to lower prices for eye care, hearing aids and dentures. Successfully so, except in the dental sector.

Insurers, complaining they are paying out blindfold from behind the social security system, have created risk management tools in the form of healthcare networks. They mainly work in fields where most of the spending is reimbursed by complementary health insurance providers, and where they can have a positive influence, namely opticians, dentists and audiologists. The idea is to select professionals, opticians, dentists or audiologists with whom the chains negotiate beneficial pricing terms. Such pricing moderation ultimately delivers a reduction in the OOP expense borne by the insured, which can be significant in these three segments (an average of 24% for opticians, 35% for dental prostheses and 57% for hearing aids).

“Two types of networks coexist on the health market, i.e. networks open to all professionals who agree to sign a commitment, and closed networks (Santeclair and Itelis in particular) which accredit a limited number of professionals. Closed networks seem to have greater effectiveness on prices,” according to Jean-Marc Esvant, Head of Social Protection at Verlingue.

“Price negotiations are indeed more pressurised with professionals in a closed network. We select fewer providers, but in exchange for a greater decrease in prices, we bring them a large proportion of their revenue,” explains Jean-Marc Boisrond, chairman of the Itelis board. Healthcare networks now serve as umbrella organisations to thousands of healthcare professionals, and potentially cover no fewer than 45 million insured individuals.

Necessary for survival. “This success is because of the intense competition that prevails in these sectors, especially eye care. Belonging to a network does not always provide a commercial advantage, but is often necessary for survival,” observed the French general inspectorate of social welfare (IGAS) in its June 2017 report on healthcare networks.

“Companies nowadays are much more accepting of such networks, because they have demonstrated their effectiveness in controlling costs and OOP, and have begun to offer ancillary services for insured persons in paying for their health care,” according to Jean-Marc Esvant. IGAS has in fact observed a price differential, whereby healthcare and products bought from a network are considerably lower. “This difference is particularly noticeable at opticians: approximately 20% less for adult lenses, 10% less for frames and up to 37% less for certain listed lenses… In the hearing aid sector, the price differential between those in the network and others remains significant, at around 10%. In dentistry, price differentials appear to be more modest,” IGAS reports. At Itelis, the discount on prices is on average 40% in eye care, from 10% to 15% in hearing aids, and ranges from 15% for dental prosthesis to 30% in implants, according to Jean-Marc Boisrond.

“This is even more effective when the insurance policy itself stipulates different reimbursement depending on whether or not the insured patient uses the network, with typically higher reimbursement for those who do,” he explains. IGAS notes the same effect: “From the healthcare access viewpoint, networks generally have a favourable effect, and a significant difference is seen in OOP for insured individuals who use these networks, particularly in eye care (around 50% less). The gap is mainly due to price differences, but also a higher level of reimbursement.”

Medical services rendered. Such networks are nowadays the most highly developed and most used in eye care, where the notion of the medical aspect of the service is weaker, the service being identical from one optician to another. “Half of our corporate clients use health networks, and all of them use eye care networks,” confirms Jean-Marc Esvant. Networks emerged most recently in audiology, but “they are expanding rapidly, with some platforms now covering 80% of sales outlets,” according to IGAS.

“Half of our corporate clients use health networks, and all of them use eye care networks,” Jean-Marc Esvant, head of personal insurance at Verlingue.

In dentistry, in contrast, the results are less conclusive. Dentists do not often need additional patients, and as health care professionals, they take a dim view of supervision from complementary insurance providers. Above all, the price difference is not enough to encourage patients to change their dentist. They are typically very attached to their current dentist, being the family dentist or, more often, a dentist who does not hurt them during treatment.

There are definitely aspects to be improved, as IGAS reports, but at a time when the government is thinking about zero OOP, healthcare networks or something resembling them, could be an avenue to explore.