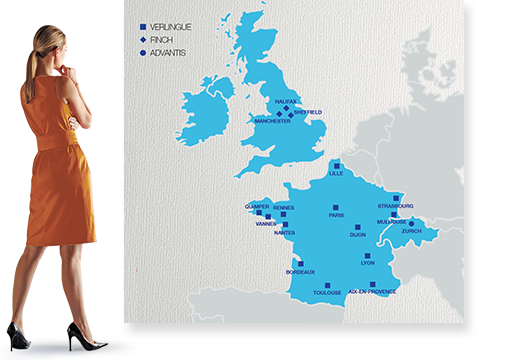 Jacques Verlingue (Chairman) and Eric Maumy (CEO) have announced the acquisition of one of the leading insurance brokers in Switzerland: ADVANTIS (Zurich).

In the spring of 2016, the Verlingue management team presented #2018, their new strategic plan, and announced Verlingue’s ambition to continue expansion in France but also to seek new growth opportunities elsewhere in Europe. The target announced was to establish a presence in 2 new countries (in addition to France where Verlingue trades out of 13 major cities and the UK where the company is established since 2007).

With the acquisition of Advantis, effective 29 August 2016, Verlingue takes a first important step in realising its European ambitions.

Advantis specialises in risk management and employee benefits and is one of the leaders in commercial insurances in Switzerland. It has a staff of 40 and handles premiums of CHF 250m on behalf of its clients, mainly national and international, large and medium-size organisations.

Advantis is an offshoot of the insurance consulting activities of KPMG. The company’s growth has been based on:

– a high level of expertise in the field of corporate risks and employee benefits,
– differentiation through service and high customer satisfaction,
– career development for its top level teams servicing 450 corporate clients.

With the acquisition of Advantis, Verlingue, which is one of the European leaders in commercial insurances and has a worldwide presence through the WBN network:

– reinforces its direct trading in Europe, a region with a dynamic market and an economy consisting of a large number of SME’s, medium-size companies and large corporations.
– confirms its international and multicultural dimension by strengthening its expertise and know-how for the benefit of its whole client base.

Senior staff at Advantis will continue to manage the company with the backing of Verlingue management and teams. The objective is to accelerate the growth of Advantis in Switzerland, build on the company’s expertise whilst maintaining the high level of customer satisfaction that is its trademark.

Jacques Verlingue – Chairman of VERLINGUE and the ADELAIDE group says: “Switzerland was one of the countries in which we wanted to establish a presence as a priority. With Advantis we have found a top quality team that has developed considerable expertise in corporate risk management consultancy and employee benefits. The acquisition of Advantis fits perfectly with our strategic plan and allows us to take a new step in our European growth, which began 10 years ago with the acquisition of Finch in the UK.”

Urs Burger – the ADVANTIS CEO says: “We have experienced continuous growth over the last ten years and have been asking ourselves the question of whether to seek the backing of a successful company to provide us with ongoing support. We chose Verlingue because we share the same culture of building value for our customers. This is an exciting page that opens for the management and 40 employees of Advantis.”

Eric Maumy – the VERLINGUE CEO says: “In addition to being a source of growth in a dynamic economy at the heart of Europe, this acquisition strengthens us significantly. Indeed, Advantis occupies a leading position in the large and medium-sized company sector with its highly specialised expertise in risk management and international programmes, and these are areas in which we are developing strongly.”