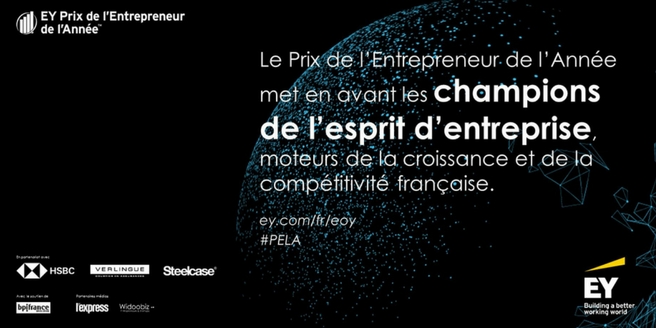 The EY Entrepreneur of the Year Awards has launched its 26th edition aimed at highlighting the exceptional track records of the women and men who are driving growth and competitiveness in France.

Here are the main stages of the 26th edition:
Starting from 19 February: Opening of registrations
April-May: Finalisation of applications
18 May: Closing of registrations
From 13 to 17 June: Global awards ceremony in Monaco
July: Deliberations of the regional juries
September: Regional ceremonies and national jury
October: National ceremony
November: Entrepreneur Academy

The Entrepreneur of the Year Awards is organised by EY, in partnership with insurance brokers Verlingue, HSBC France and Steelcase, a world leader in furniture for the services sector, with the support of Bpifrance and media partners L’Express and Widoobiz.

See the criteria, the schedule, the videos and the award-winners.