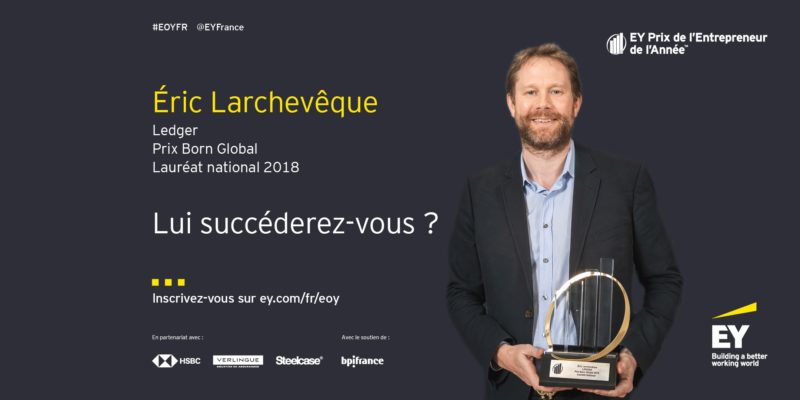 In 2018, four awards were given to outstanding French entrepreneurs, including the Born Global Award which was won by Eric Larchevêque, the CEO of Ledger.

Eric Larchevêque founded Ledger in 2014. With the help of seven other experts in blockchain, embedded security and crypto-currency, he designed and built a “wallet” that contains all the digital data of the holder’s crypto-currencies. The cyber-coins are therefore held in a small secure device with a chip that looks similar to USB key, protected by a PIN code. Today, Ledger employs more than 150 people on three continents. After raising initial funding of €1.3 million in 2015, the start-up raised a further €5.4 million and then $75 million in 2017. In 2017, Ledger generated sales of €46.5 million, with 34% of its revenue coming from the United States.

The Entrepreneur of the Year Award is organised by EY, in partnership with Verlingue, HSBC France, and Steelcase, with the support of Bpifrance. The Entrepreneur of the Year Award is a unique international scheme that acknowledges the entrepreneurial initiatives of outstanding men and women who have demonstrated innovation, leadership and excellence, while contributing to improving the quality of life in their region and country or around the world. Directors of companies that combine growth and profitability are invited to take part in this prestigious competition by submitting their applications online at www.ey.com/fr/eoy before the beginning of May.

Further information about the Entrepreneur of the Year Award